Nikki often accuses me of not laughing enough and if this is true, then I put it down to my profession. Perhaps, I am unwittingly studying why something is funny rather than just enjoying it.

Maybe so – but I still push back of course. I state firmly that I laugh plenty – just not with you!

I am joking btw.

But it is certainly true that I rarely laugh out loud watching films. Especially so when my boys recommend an apparently funny film to me. I’m no prude but the gross out tendency of modern comedies like Horrible Bosses and Knocked Up leave me cold and so too the modern ultra-cool films like The Favourite which somehow critics regard as hilarious.

That said, when I do laugh out loud watching a film – it is probably noteworthy.

Some actors do comedy very easily. Ben Stiller, Owen Wilson, Steve Carell and the much maligned Adam Sandler. I watched Uncut Gems recently and the auction scene had me chuckling along.

And I add Robert Downey Junior to this list, also.

I don’t know which film I am about to reference – which is poor parenting because my son appears in the movie and is even in the blinking scene.

I can only approximate. It is either a Spider-Man or Avengers film – but which one, no doubt, my readers will enlighten me on.

Tom and Robert are dressed normally. Tony Stark (RDJ) is about to introduce Peter Parker (TH) to a press conference that he has organised. Mr Stark explains that through these doors, the world’s press are assembled.

“…the room is full of proper writers. No bloggers.”

A line that is barbed and disparaging to people like me – but nonetheless, it made me howl and stayed with me.

RDJ is a funny man – a fact I have on good authority from all my boys and I wonder if this line was an ad-lib, which is his way and something Tom can attest to.

And what then are bloggers – who apparently are not proper writers.

A blog is basically a platform for anyone without an official channel. A TV or radio show, a newspaper column or a publisher.

In the past, I have had all of these glamorous outlets – but no longer.

And so my blog is my opportunity fo me to remain heard. A blog allows the everyman (or every-person?) to circumvent the gatekeepers who have dispensed with the likes of me and you.

But most blogs have an ulterior motive and usually to propagate our wares. As such, I am guilty as charged. My blog is a vehicle to sell my books and my gigs. And nothing untoward here. After all, we all have to eat.

And with this in mind, I am delighted now to allow one of my readers to complete this blog post for me.

By way of introduction and explanation…

I am always pleased to read reviews of my books. It is heartening and encouraging (poor reviews aside) and is  best demonstrated by an email that we received via The Brothers Trust – regarding Open Links – from which all the proceeds go to Anthony Nolan and their life saving work.

Audrey Lehrer writes very well and makes the point better than I could – so I defer to her now and thank any of you who respond to her review by using the link to purchase Open Links – and more generally, thank you also to all my readers of this blog.

Review: Wow. I think that is the only word that can really describe my experience with this book.

I will fully admit though, I did have some second thoughts on whether or not I would enjoy the book. First, off, I have not read for a while and am a graduate student with a full schedule. Did I even have time to read this book? I also know next to nothing about golf having had little exposure to the sport throughout my life.

In the end however, I was curious. At the end of the first chapter I was hooked. Six days later I finished the last sentence with a satisfactory smile and tears in my eyes having just read a story that was so much more than I expected. The way that the character’s individual paths connected throughout the story was just wonderful and the ending was perfect. I felt as though I had been transported to a different world. A world for the record, where I loved golf. I applaud Mr. Holland’s ability to incorporate the nuances of golf into a riveting story about life’s surprising moments.

I strongly recommend this book to anyone and everyone. Trust me, you will find a character to connect with and you will embrace the world that this book holds. Once you pick up the book, prepare yourself for an amazing read.

Thank you again to the Anthony Nolan Trust for your life saving work and to The Brothers Trust for opening up my eyes to all of the amazing people who are fighting to make the world a better place. Finally, thank you to Mr. Holland for writing this book and giving me “my spectacular moment” of the week. I look forward to reading your other works and re-reading this incredible story in the future.

(Sent via The Brothers Trust) 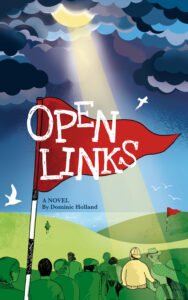 Click here to purchase a copy of Open Links

BUY ONE OF MY BOOKS

BOOK ME FOR A LOCAL GIG