Amidst the Corona hysteria gripping the world, it seems that hunkering down and staying away from crowds is the way to survive. Or at least this is how it is being reported; along with avoid travelling and in planes in particular with the close proximity and recycled air.

A problem for me then, given that I write this post in Dubai – on my third day of a 10 day tour.

I could have cancelled the gigs of course but for the fact that I would forego my fee. My career choice being the original zero hours contract. No sick pay. No contracts. No laughs, no gigs and no money!

And people ask me if I get nervous?

I am always nervous.

Nowadays, a  refrain I often hear is ‘but you’re okay though, cos your son is spider-man, innit.’ Whatever truth there is to this, it will be dark day when I need my lunch to be bought for me by any of my kids.

At Heathrow very early in the morning, I am struck by how busy the airport is. Obviously, people other than me are not heeding the hysterical advice of our media. Life goes on right…

At my gate, I am fleetingly excited that I am about to board an Airbus A380. The monster planes that I have only seen in the skies until now. During the filming of The Impossible, I recall a conversation with Ewan McGregor who explained that on the A380 – he even had his own cabin. In the queue (line) for the plane I am even sufficiently moved to whip out my phone and take a photo.

However, my excitement doesn’t last long. Quickly, it wanes as a I board. I have a seat and not a cabin and all planes look and feel the same on the inside, right. Three families ahead of me are creating chaos because the parents want their kids to sit together – or as it transpires, away from them. Air hostesses are making polite requests to already settled passengers and some eventually agree to move, albeit, begrudgingly. I am not asked to move but shortly in to my flight, I realise that this is to my cost. Because three of the kids are placed behind me and play Battleships for the entire flight – using their touch screens – which make up the back of my seat and when playing BattleShips, why touch the screen when it can be punched.

I arrive in Dubai – a little frayed and older – reminding myself that I have four kids and they must have upset people on flights over the years and I rush from the airport to my first gig – arriving just as the show goes up.

I don’t relish gigs aboard. Mainly, because I miss home (my family of course, but mainly, Tess) but also because it isn’t until I get onstage that I realise that my act doesn’t work. Or bits of it anyway, because some of my references are missed by the International audience – and I make painful adjustments and edits for the next show.

Note to audiences in the Middle East this week – come and see me on the last night.

Just three comedians on the bill.

And then, finally, it is my turn – and I open with an apology for ruining what until now has been a perfectly diverse bill.

A question I am commonly asked is where does my inspiration come from?

An enquiry that gives me licence to offer a lofty and pompous answer; that I wander through museums and lose myself in great literature and poetry. I do no such thing. In truth, I just do things and I trust myself that thoughts and ideas will occur to me.

Unlike most visitors to Dubai, which is 90% of the population – I am not here for the money. Club money for 5 gigs and over 10 days makes little economic sense. But I am here for the experience. Spending time and getting to know my interesting colleagues alone makes the trip worthwhile.

Dubai is many things and it is difficult to adequately describe in a short piece of writing like this. In summary and in one word, I suggest that above all else, Dubai is confused. Or perhaps, confusing. A place of opposites and contradictions. Clashes and incompatibles and yet somehow, it manages to work.

Like the world cities that we have, New York and London – Dubai is certainly a melting pot of humanity.

But it is a city on sand, its roots are not deep and its population is transient, moving in, on and through. And a culture clash too; an Islamic country but one beholden to Western brands and where consumerism reigns supreme. It is the land of indulgence and conspicuous consumption.

Shopping malls offering up literally acres of retail space to sell mainly jewellery and watches it seems. One mall famously has its own ski slope and another boasts of the world’s largest aquarium.  And cinemas too. On a recce visit yesterday, I am amused that as well as Dominic Holland appearing in Dubai this week – my son is too – with three of his films currently being shown – Dolittle, Spies in Disguise and Onward – a constant and welcome reminder of my life and I smile, happy to be here doing my best stand-up but still knowing that I am Eclipsed. 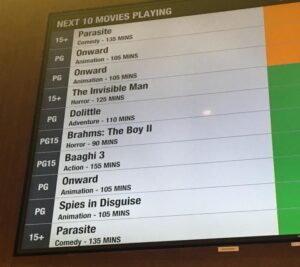 So my inspiration comes from getting up, getting out and looking about. But be mindful of this and what you might see.

When I return to my hotel room today, my TV has been left on, presumably by a maid/cleaner – and I am greeted by television footage which utterly depresses me.

It is not images associated with news of the Corona virus; body bags in Iran or people fighting over toilet rolls in a UK supermarket.

It is something even more troubling. It is a music video and it unsettles me because it is something to herald. A piece of popular art, no less.

It is so gauche, at first, I wonder if it isn’t a pastiche. A comedy show and the work of a satirist. The sort of clip that my boys often show me on their phones…

But my hopes quickly evaporate. This is not a pastiche. It is too long to be a comedy sketch. This is a real music video and now I am compelled to continue watching. I half recognise the song but I need to know who the singer is. A pouting lady, cavorting her distended body on various beaches – which is appropriate I guess, because isn’t silicone just sand?

The Coronavirus might have gripped the world and is accompanied by many apocalyptic claims and predictions – which as a middle aged man, I tend to take lightly because I think that the world will recover. Cleverer people than me who wear white coats at work will figure things out and Corona will just become a brand of beer again.

But a much greater danger than this new virus is posed by the video showing on my hotel TV – who transpires to be Nikki Minaj for her song, Starships.

And because Nikki Minaj is a star and a huge success story. Something to shoot for then?

I would say not.

It is the same clever professionals in white coats who have performed the multiple surgeries on her body.

Medicine is the most noble and vaunted profession; after the religious life, the profession most associated with vocations.

A calling to help people. To cure the sick.

What is more noble than this?

But training to understand the body and it’s physiology in order to cure ailments is a world away from the medicine that confects and distorts our bodies to conform to bizarre new notions of beauty. We saw it with Michael Jackson, who dare I say it, died a pale shadow of the beautiful man he once was.

And so it is with Nikki Minaj. The self-imposed damage to her, although significant, is nothing to the damage wreaked on young women who want to emulate her and on the young men who find her attractive.

Look but don’t touch – or partake has never felt like such sage advice.

BUY ONE OF MY BOOKS

BOOK ME FOR A LOCAL GIG

23 thoughts on “Me getting all Gandolf on you…”