The Open Championship on Sunday is always one of the great days of the year. The only game that I play and the sport that I love; the hardest game of all and why I admire it’s protagonists so much. Their skill and guile but also the mental toughness and fortitude that is required with a stationary ball, over four long days and under the most immeasurable pressure.

So much happened this weekend to make the 2019 Open Championship stand out from so many before. The venue of Royal Port Rush in Northern Ireland and a united Ireland to behold and courtesy of sport and its unique appeal and fervour. The beautiful island of Ireland has been a geo-political hot potato for my entire life and even more so with Brexit and something called the backstop. Anyone?

Nothing so surprising about an Irish winner of the Open Championship – and from either side of the border. McIlroy, Clarke, McDowell and Harrington have all recently heard the intoxicating words, “this year’s champion golfer” – and now add Shane Lowry to this illustrious list – from the republic of Ireland and cheered to the rafters by everyone; a heart rending and affirming site even before his wife and young daughter, Iris hit the 18th green.

Other notable markers… McIlroy’s calamitous opening round and then his remarkably brave and brilliant second round to miss the cut by 1. What might have been? Former champion, David Duval’s 15 or was it a 14 on a par 5? The greatest players laid low in this most humbling game and giving us hackers something to cling to and a belief and a hope that better days lie ahead. And on it goes; Tiger Woods and Phil Mickelson both missing the cut. No amateurs making the cut…

The 2019 Open Championship had everything aside from a competitive final round and yet was a complete triumph – and with so many stories, it is sad then that the people of Britain were unable to watch it on television.

More people watched a journeyman called Todd Hamilton win the Open in 2004 than watched the ever popular Shane Lowry storm to victory on Sunday. Indeed, more people probably watched the gym bunny narcissists of Love Island than the climax of one of the biggest sports events of the year.

Because the people who manage the sport of golf decided to go with the millions of Sky pounds on offer rather than the millions of eye balls that terrestrial TV provides.

A fool’s gold of epic proportions.

When I grew up, the whole country watched Alan Minter beat Vito Antuofermo for his world title but how many modern day boxers have we heard of and admired but have never seen ply their trade.

And cricket, too. The 2005 Ashes series captivated a whole nation on Channel Four, making cricket fans of us all but then the barren years ahead until that extraordinary Sunday a few weeks back when passions were rekindled over a most remarkable match.

And this is why Shane Lowry was robbed.

Not that he minds particularly, I am sure – with his 2m euro purse and the richly deserved accolades of the Irish fans who do celebrations better than anyone else.

But robbed still of the millions at home, watching and cheering him on – who had to settle for listening to his story unfurl instead.

Your life has changed forever and thoroughly deserved too.

Tiger Woods is the golfer who still sets the bar. Every golfer yearns for his record but how many of his colleagues would want his life in a goldfish bowl; being the most recognisable sportsman on earth.

And so, maybe with golf receding from our TV screens – Shane Lowry will preserve his precious private and family life better than he might have done and this is a good thing.

But this an unintended consequence of a decision by administrators that surely they will come to rue.

My plan for Open Links is to republish it via domhollandbooks – but with the proceeds still going to Anthony Nolan. For now the book can be purchased here – with all proceeds going to a cause as good as any. 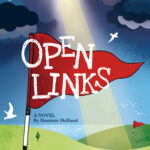 One thought on “Open Folly…”